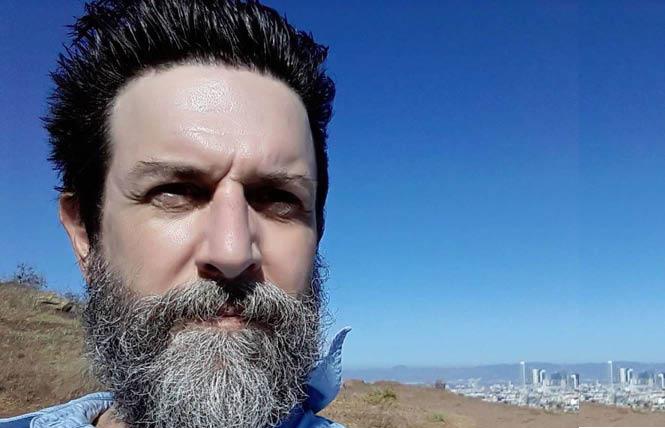 The mother of Christopher J. Woitel, 50, last heard from the Guerrero Street resident January 9, according to an SFPD news release February 10.

Having lived in San Francisco since his 1988 graduation from high school in Oak Park, Illinois, just outside Chicago, Woitel is known to frequent Emeryville and Sonora in Tuolumne County, the statement reads, adding that he is a white male, 5 foot, 10 inches tall, 200 pounds and with brown hair and brown eyes.

Mark Guarino, who is handling media relations for the Woitel family, disclosed Woitel's sexual orientation to the Bay Area Reporter February 11 — and that his family members are traveling to the Bay Area this week. They plan to distribute fliers outside Woitel's apartment Friday, February 12, at 1 p.m.

According to Guarino's release, Woitel's family has been seeking police assistance for several weeks and has asked the department to open an investigation. SFPD issued its news release only days before Woitel's family arrived in the Bay Area.

Guarino also told the B.A.R. and other media outlets in a news release that a private investigator hired by the Woitel family had completed his report February 5. This P.I., Scott Williams of the Brisbane-based inVision private investigation company, went into Woitel's apartment and found it seemingly unscathed.

Woitel's mother is quoted in the report as stating that her son's credit card and bank accounts are untouched. The report also states that security camera footage at his apartment last shows Woitel on January 8 at 8:38 p.m.

But Williams' investigation did lead "to the profession of a homeless man living in a tent encampment in Emeryville who said Woitel was murdered, [and] his body deposited in the Bay at the end of Mariposa Street," Guarino's news release states.

"Woitel had befriended the homeless man years earlier in an effort to help him off the street. The man was in possession of Woitel's cellphone when Williams interviewed him February 2. The investigation also revealed the man is allegedly wanted for aggravated assault charges in Pennsylvania," it continues.

"Further evidence is a trail of social media and text messages that show Woitel's frantic state of mind regarding the homeless man's possession of his phone and anxiety over the recent U.S. Capitol insurrection in Washington," the statement reads. "Surveillance video shows the homeless man coming and going from Woitel's apartment."

According to the report, the homeless man claimed he had purchased the phone from Woitel on January 7 for $100. (Williams left him with the phone.)

The homeless man claimed to know about the alleged murder because he has "strong psychic abilities" and had seen a vision of Woitel being "shot in the head and wrapped in plastic before his body was dumped in the water at the end of Mariposa Street in San Francisco near an abandoned warehouse."

The man gave Williams the names of those who were "responsible for doing that to Christopher."

Williams added in the report that "it is clear [the homeless man] suffers from mental illness and as such could be delusional."

"I would recommend to the family that a detective from the SFPD make contact with [the man] and follow-up with the statements he has made pertaining to Christopher's disappearance," the report concludes. "The fact that Christopher's bank activity has completely ceased since 01/08/21 and neither any of his family or friends have seen or heard from him since 01/09/21 warrants additional investigation by the police in my opinion."

When asked if the SFPD had been inside Woitel's apartment, Public Information Officer Robert Rueca told the B.A.R. February 11 that "with the assistance of a responsible party officers made entry into Mr. Woitel's residence, but were unable to locate him there."

Woitel's disappearance recalls the case of Brian Egg, a gay San Francisco man who went missing in 2018. In that case, SFPD officers went to Egg's South of Market home three times but did not enter it. It was only after officers were alerted to a crime scene cleanup crew being at the property that police did enter the home, where they found Egg's headless torso in a fish tank. Egg's bank account was drained, but two men questioned in connection with Egg's disappearance were never charged.

Anyone who sees Woitel should contact the SFPD through the department's tip line at 415-575-4444, or through text to "TIP411," beginning the message with "SFPD."