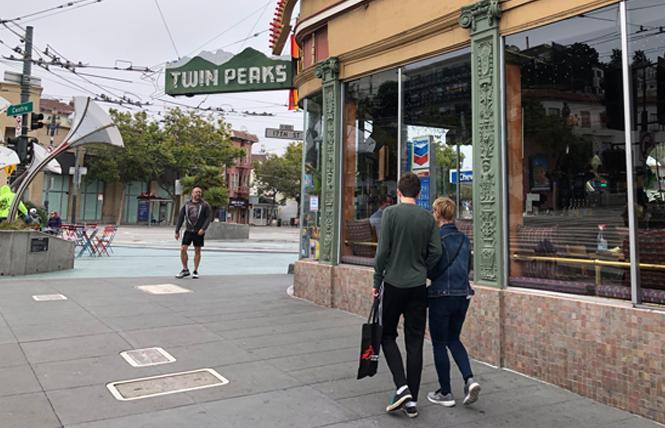 Living mere blocks from the Twin Peaks Tavern, Pond Street residents Bret Parker and Petey Barma consider the historic gay bar their neighborhood watering hole. Over the years the couple have befriended many of the longtime gay male patrons and employees of the local landmark situated on the corner of Castro, Market and 17th streets.

The 84-year-old business at 401 Castro Street has a storied place in LGBT history. When lesbian business partners Margaret Ann "Peggy" Forster and Mary Ellen Cunha, who are both now deceased, bought it in 1972, they scraped off the black paint covering the windows so their patrons could be seen by passersby. It was the first known gay bar to do so and coincided with the Castro's transformation from a working-class Italian and Irish Catholic enclave into a gay mecca.

Known more as a bar for socializing with friends than as a pickup spot, its gay patrons have long seen it as their own living room. From their perches on their designated bar stools or tables situated near the windows, they have had a front row view to the history taking place outside over the last five decades.

Now in their 70s and 80s, many of the men are passing away, taking with them their memories of witnessing the birth of the modern gay rights movement, surviving the horrors of the AIDS epidemic, and seeing the Castro come full circle to again be attractive to straight families.

Wanting to capture those stories for posterity, Parker and Barma set out to interview the bar's longtime customers and staff about their experiences. The women turned the footage they captured into the documentary "Through the Windows," which had its premiere last month during Frameline, the city's LGBTQ international film festival.

"When history is taught in school, you get glimpses of the superstars in history. You don't get glimpses of everyday people," said Parker, an animator at Pixar Animation Studios who also does voice work, providing the voices for Kari, the babysitter in "The Incredibles," and the ball of yarn Purl in the short film of the same name. "A lot of these men have remarkable stories that are going to be lost."

Those stories have relevance not only for younger LGBT people but also straight people of any age who weren't taught about LGBT history, added Barma, a local educator.

"The straight community, young and old, has no idea about all the events happening around us right here," said Barma while seated at a table in the bar's small balcony area.

Parker, 50, and Barma, 53, who both identify as queer, have been together 16 years and married in 2008. They revived Parker's Artfarm Productions in November 2016 when they began work on their first film.

In November they plan to travel to Nassau, Delaware where their documentary will screen at the WRPN Women's International Film Festival. They have also submitted it to film festivals around the world and are awaiting word on if it will be selected in any.

In the meantime, they are focused on raising $9,000 by August in order to secure the rights for the archival footage they used in the film. They licensed the rights for a year so it could screen at Frameline.

It is part of a $30,000 fundraising campaign the couple is undertaking not only to support the costs associated with their film but also to continue documenting the stories of the patrons at Twin Peaks. They intend to post short features online about the people at the bar and other LGBT elders they know as part of a project the couple has dubbed "mapping queer history."

"We want to keep this project going," said Parker.

Tax-deductible donations can be made online via the film's website at https://www.throughthewindows.com/. As of this week they had netted just $525 toward their goal.

Outside of screening the film at festivals, the couple have yet to strike a distribution deal. They have applied to be accepted into Frameline's distribution program in order to get their film in front of audiences and into classrooms.

Jeffrey Green and George Roehm, gay men who worked as bartenders at Twin Peaks and became its co-owners 16 years ago, are among those whose stories are included in the film. They are delighted with how the documentary came out.

"We trusted them with telling our story respectfully," said Green. "And they did. We are proud of them and how they pieced it together."

One request they made of the filmmakers was that they not refer to the bar by one of its nicknames, "The Glass Coffin," as they view it as an ageist and derogatory descriptor. Barma said it is "not a phrase we like, to be honest, and it is not used in the film."

Parker added that it is "misused," as originally it didn't refer to the ages of the patrons of the bar but came about during the AIDS crisis when so many of the neighborhood's gay residents were dying.

While that history of how AIDS impacted patrons and employees of the bar is discussed in the film, a different nickname for the Twin Peaks is cited, that of it being a gay "Cheers." Just like the title of the theme song for the TV sitcom centered on a Boston pub, the Castro bar is a place "where everybody knows your name," several of its patrons remark in the film.

Today, Twin Peaks is also a bar where the patrons are no longer just gay men. Sitting next to the longtime customers are younger LGBT people and straight European tourists.

"Even though we identify as a gay bar, our customers have changed as the neighborhood has changed," said Green.

"We have straight customers, gay customers of all ages," added Roehm.

Twin Peaks Tavern opens at noon Mondays, Tuesdays and Wednesdays; at 10 a.m. Thursdays and Sundays; and at 9 a.m. Fridays and Saturdays. It closes nightly at 2 a.m. and is cash only.

As for the filmmakers, they are already at work on their second film, an animated short based on Barma being the first girl to play on a boy's baseball team in 1975 where she grew up in central Florida. Later in life she learned from her mother the significance of her breaking through that gender barrier.

"I knew I was the first girl to play. I didn't know at the time about the controversy it was causing in the stands," said Barma. 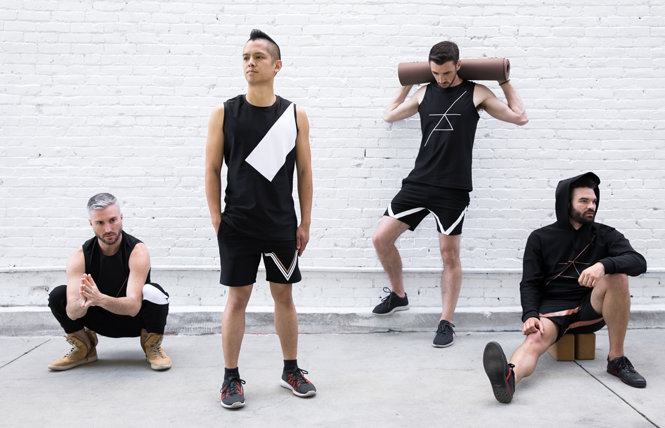 Coroa is a new line of yoga wear for men. Photo by Lauren Lemon

Unsatisfied with the yoga clothes available for men, Pazos decided to design his own line. Called Coroa, the Galician word for "crown," it launched July 5.

The clothing, made in L.A., is inspired by Pazos' hometown of Galicia, Spain. As he explains on the line's website — https://www.coroayoga.com — he drew inspiration from the Celts, early inhabitants of the region, for the look of the garments.

"The designs are very geometrical. When you are wearing them and practicing yoga, you see the lines moving with you," said Pazos, who moved to southern California in 2009 and owns his own PR firm. "The pieces inspire you to move. As you move with them, you are generating these beautiful feelings."

He is selling a variety of muscle shirts ($80), shorts ($110), a calf-length pant ($140), and a hoodie ($160) in black fabric with white and copper color accents. Available only online at the moment, Pazos is looking to have established stores in gay neighborhoods carry his line.

Eventually, he would like to open his own yoga studio. For the moment, he hopes his yoga clothing line will inspire more men to take up the practice. To do so, he is promoting a yearlong #moremenonthemat campaign via social media.

"We hope by us putting out this yoga line it will bring more men to the mat. People think yoga is for women, but yoga is gender neutral," he said. "I think society would be a better place if we all did yoga."

Pazos also hopes his being a foreign born entrepreneur can serve as a counterweight against the xenophobia and anti-immigration rhetoric that is on the rise in America. A green card holder, he expects to become a U.S. citizen in August.

"I am an immigrant and want to showcase not all immigrants are bad," Pazos said. "I am committed to this country."

Honor Roll
The 30-year-old lesbian-owned Cruisin' the Castro Walking Tours has become the first tour company in San Francisco to be declared a legacy business. The city's Small Business Commission approved the designation in late June.

Trevor Hailey, who died in 2007, started the business and then sold it to Kathy Amendola when she retired in 2005. The popular two-hour tours, which cost $25 a person, trace the development of the city's LGBT community from the Gold Rush era up to the modern day.

"As the most comprehensive LGBTQ tour in the world and now a proud San Francisco legacy business, we will continue to educate and empower diversity and civil rights," stated Amendola. "Making a difference is such an honor!"

To book a tour, visit https://www.cruisinthecastro.com/.