Exploring the heart & soul of Sylvester 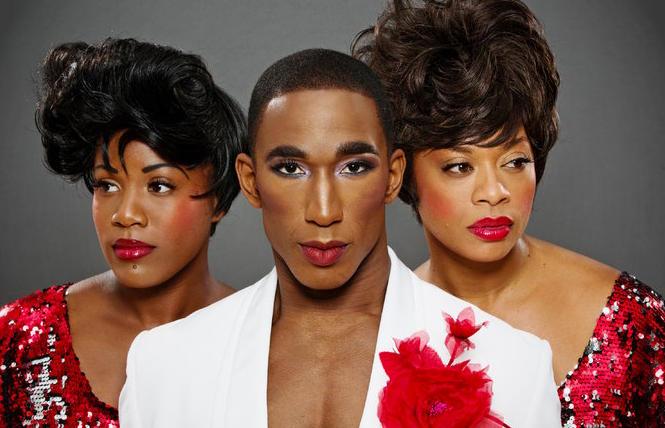 It seemed pretty fabulous at the time. Anthony Wayne, fresh in New York from his native Virginia with a music-theater degree in his pocket, quickly landed his first role. Many more jobs followed, in tours, regional theater, and Broadway, but it began to seem that "ensemble" too often followed his name in theater programs.

"The truth of it is that there aren't that many roles for African American men of my age, my look, my voice type," he said from New York. And he was again in the ensemble of a 2011 summer concert series in New York where Kendrell Bowman, his new partner, happened to be in the audience. "Right before the performance, one of the guys wasn't able to sing the lead, so they asked me to do it," he said. "After it was over, Kendrell came to me and said, 'You know what, people need to hear your voice, to know that you can be more than just part of the ensemble.' And he was, like, let's try to make it happen."

Anthony Wayne wanted to break out of Broadway chorus roles when he was inspired to create a musical biography of disco star Sylvester. Photo: Courtesy the artist

After seeing a TV biography of the singer Sylvester, Wayne had begun shopping around an idea for a musical based on his life and music that he would write and star in. "Nobody believed that I was able to do it, so we decided to do it ourselves and raised enough money through Kickstarter to do the very first concert version."

That was in 2012, at a Manhattan nightclub, and the culmination came last year when Mighty Real: A Fabulous Sylvester Musical made its official off-Broadway debut. Its next stop is San Francisco, where the androgynous singer first grabbed the spotlight in several Cockettes musicals before launching his own career as a disco star. Brava Theater Center will be home to Mighty Real from Feb. 11-March 1, and a holdover is possible if the demand is there.

Wayne, who co-directs the musical with costume designer Bowman, is not reticent in expressing his expectations for the SF run. "Once we do the first performance, the word is going to spread," Wayne said. "It's going to be crazy. I know the show's going to be selling out."

The musical lets Sylvester tell his own story, from an uneasy childhood among religious fundamentalists in Los Angeles' Watts neighborhood, to his rift with his family over his homosexuality, and his migration to San Francisco in search of both personal and artistic freedom. Sylvester developed his persona that mixed male and female attire and attitudes, although record labels would periodically ask him to tone down the feminine aspects. Any acquiescence in that department usually didn't last very long.

Sylvester's glory years came in the late 1970s and early 80s with such hits as "Dance (Disco Heat)," "You Make Me Feel (Mighty Real)," and "Do You Wanna Funk." As the hits slowed down and the rise of AIDS became alarming, Sylvester was an early activist and fundraiser. He suspected he was infected, but declined to take a test, and his health declined rapidly before his death in 1988. The showï¿½s framing device has Sylvester given one more night to tell his story, punctuated with a hit parade of songs and disco balls.

Wayne is accompanied on stage by four cast members and a five-piece band. Anastacia McCleskey and Jacqueline B. Arnold, whom Wayne met during his Broadway run in Priscilla Queen of the Desert, play Sylvester's backup duo Two Tons o' Fun, who went on to become known as the Weather Girls, and their hit "It's Raining Men" is part of the show's song list.

"We also show you the heart and the soul of the man behind the glitz and the glamor," Wayne said. "We have spoken to his family and friends and managers. He takes you through his journey through life, his love life, and even the hard times. People really come out of the show feeling liberated, and feeling they can live their best life, because that's what Sylvester did. It gets really emotional toward the end when he was letting people know about HIV and telling them that they should take care of themselves."

One of the show's early boosters was Broadway actress Sheryl Lee Ralph, who responded to one of the many tweets Wayne and Bowman sent out to celebrities looking for support. Ralph and her Diva Foundation that works with HIV causes became an early producer, and the project quickly built from there. But its roots are definitely grassy.

"What Kendrell and I did in the beginning was, we'd go to these parties in Harlem and Brooklyn and put up posters and hand out flyers," Wayne said. "There are times when you just have to take matters in your own hands."

So what is in store for Mighty Real after its San Francisco run? "We're talking with different theaters around the country, but for right now, San Francisco has really been our goal," Wayne said. "We want to make San Francisco proud of what we did with something that was created in our apartment here in Harlem, from the grassroots, that has just built into something beyond words. I really still can't believe it myself."