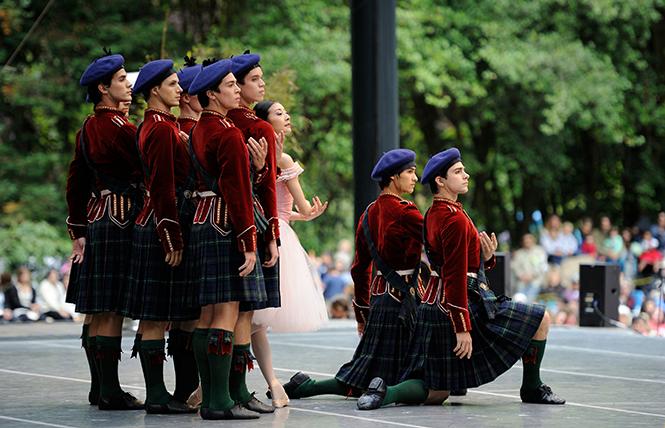 Those who've gotten away to France or Greece are probably enjoying worse summer vacations than those of us still here. Might be a good time to visit Yosemite, but if you can't get that far, you could spend a Sunday afternoon at our own sublime pocket park, Stern Grove, a natural declivity at the south end of the city that has all the abrupt, astounding beauty of a mountain gorge, thick with towering redwoods. You get a vigorous hike in the bargain: descend into the natural amphitheater; the climb back out is hella puffy. The concerts there are free. This Sunday, July 28, San Francisco Ballet makes their only out-of-season performance for hometown fans during the long dry spell for balletomanes from May to November when they're out of the Opera House. Did I mention it's free?

It's as if Thor had dropped his ax and left a natural cathedral, with columns of trees, golden shafts of light penetrating the gloom, and nasturtiums winking their golden lights from the forest floor. What Nature made has been nurtured since the Depression, when Sigmund Stern's family presented it to the city in loving memory, by leading SF environmental designers from Bernard Maybeck to Lawrence Halprin. Their care has yielded the most spectacular of all the "Greek theaters" that dot the California coast. Thousands of San Franciscans visit Stern Grove every week, and many great artists have performed there.

Over the 30 years I've been going, SF Ballet's artistic director has often programmed a work that is (loosely speaking) site-specific. Stealing a page from modern dancers who've created this genre (dancers climbing the beams of converted factories, etc.), he's presented ballets that evoke the forest's ferny floor (the moonlit "Serenade"). This year's outing in that vein is Balanchine's "Scotch Symphony" (1952), which they danced here almost a decade ago. The ballet evoked more than you'd expect of the Scottish highlands, especially when our famous fog rolls in. You might want to bring a flask of Highland Mist. The dancers in their kilts make fantastic rhythmic folderols to Mendelssohn's snappy beats, especially the seconda donna. Her rapid-fire scissor-action cuts things witty and sharp, whips up a lot of brio. Dores Andre is scheduled to dance that role and should kill it, while the flexible ballerina Mathilde Froustey is down for the dreamy role of the Sylphide, dancing with Joseph Walsh. Froustey won an Izzie Award for dancing Giselle, which is the same Romantic style, and should be a vision, even outdoors in the sunshine, even lovelier if it mists.

Casting is subject to change. Anything can happen in the theater — and outdoors, surprises abound. A bee can fly up your nose, or the conductor's. (The orchestra will be there, conducted by Martin West.) It could rain, I've seen it happen; 15 years ago, Elizabeth Loscavio slipped in a puddle, bounced up, and kept turning fouettés as if she'd invented a new step. Musicians are allowed to protect their instruments from rain, and dancers are shielded from having to go on without sweatpants if it's too cold. But the show will go on if it can, in full costume, and up to speed.

The audience can be a distraction. I will admire Vanessa Zahorian to my dying day: she was dancing very difficult pas from "Paquita" as a lady in the audience was borne out on a stretcher right past the stage, right under her nose. Even as she was being upstaged, Zahorian did her steps, nothing scanted, while acknowledging that something much more important was going on. The look on her face was priceless. Now that's ballet: grace under pressure.

You never know when a star will be born, and it can happen at Stern Grove. In 1995, I saw the 18-year-old Yuan Yuan Tan kick her tambourine in the pas from "Esmeralda": brand-new here, but before she even moved you could tell she was going to be sensational. She fell down in an Italian fouetté, but bounced right back up and kept going, every step with blinding clarity, amplitude. The crowd went berserk. There's nothing better than a dancer taking a chance, falling, and getting up as if it were nothing. Grace under pressure.

This Sunday we get to see our new ballerina Misa Kuranaga in her initial turn as a full member of the company, partnered by Esteban Hernandez. She guested with SFB at the gala and danced sensationally. This Sunday she debuts in the pas de deux from "Rubies," created by Balanchine on Patricia McBride. Though it's one of the most popular of Balanchine's dances, stepping into McBride's shoes and dancing it right is hard. Its style is abrupt and witty, the pelvic tilts are jazzy, the phrasing is geeky. You've got to live it, not just make it look cute.

It's a full program: "Diving into the Lilacs" by Yuri Possokhov (Tan, with Carlo di Lanno) is hot stuff based on the feelings he had as a teenager at the Bolshoi school when the lilacs bloomed again after a long Russian winter; and the divine pas de deux from Petipa's "Sleeping Beauty," danced by Sasha de Sola and Benjamin Freemantle.

Should be a great show. Bring your picnic. Arrive early. Tie a sweater around you and a windbreaker; wear a baseball cap, sun-screen and -glasses. You have a steep hike back uphill. Though it's free, there's a cut-off limit: "Tickets reserved through Eventbrite do not guarantee entry if the concert meadow is full upon your arrival."